YOUR BODY AND
BETA-THALASSEMIA

Let’s start by talking about terms: cells, DNA, genes, and proteins. It is important to know these terms so that you can understand how your body works. Then, you can learn how genetic diseases like beta (β)-thalassemia affect the functions of your body.

Where to Start: Cells, DNA, Genes, and Proteins

GenesGenea sequence of DNA responsible for controlling inherited traits are made of DNA. They are like an instruction manual for making the different parts of your body, including telling the cell how to make proteins. 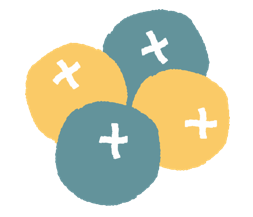 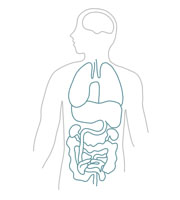 In order to work properly, your body relies on the ways that cells, genes, and proteins work together.

For instance, genes can instruct cells to make proteins that facilitate communication between cells in different parts of your body.

How Genes and Proteins Work Together

To better understand how genes and proteins work together, it may be helpful to first look at an example that is not related to beta-thalassemia: eye color.

As we said in the previous section, genes provide instructions to your cells. The instructions provided by your unique set of genes tell your cells to make certain proteins; these proteins then create an eye color that is unique to you. In other words, genes instruct cells to make proteins that are involved in the expression of a physical traitTraitan inherited characteristic (like eye color).

How Genes Are Passed Down

In the below diagram, the genes are represented by the letters A and B.

It’s easy to see why your genes are so important, since they are responsible for creating the proteins that tell your body how to work, look, and function. Let’s take a closer look at the protein within red blood cells that is affected by beta-thalassemia.

How Hemoglobin Is Formed

A balance of both alpha- and beta-globin proteins is needed to make healthy adult hemoglobin. But with beta-thalassemia, the body produces reduced or no beta-globin. This means that the body can’t make enough hemoglobin, which is needed to help your red blood cells carry oxygen to all parts of your body.

Shortly after birth, the body starts producing adult hemoglobin instead of fetal hemoglobin. This transition is known as “hemoglobin switching.”

Your hemoglobin level is measured as the amount of hemoglobin in grams (g) per deciliter (dL) of whole blood, with a deciliter being 100 milliliters (mL). The normal ranges are as follows: